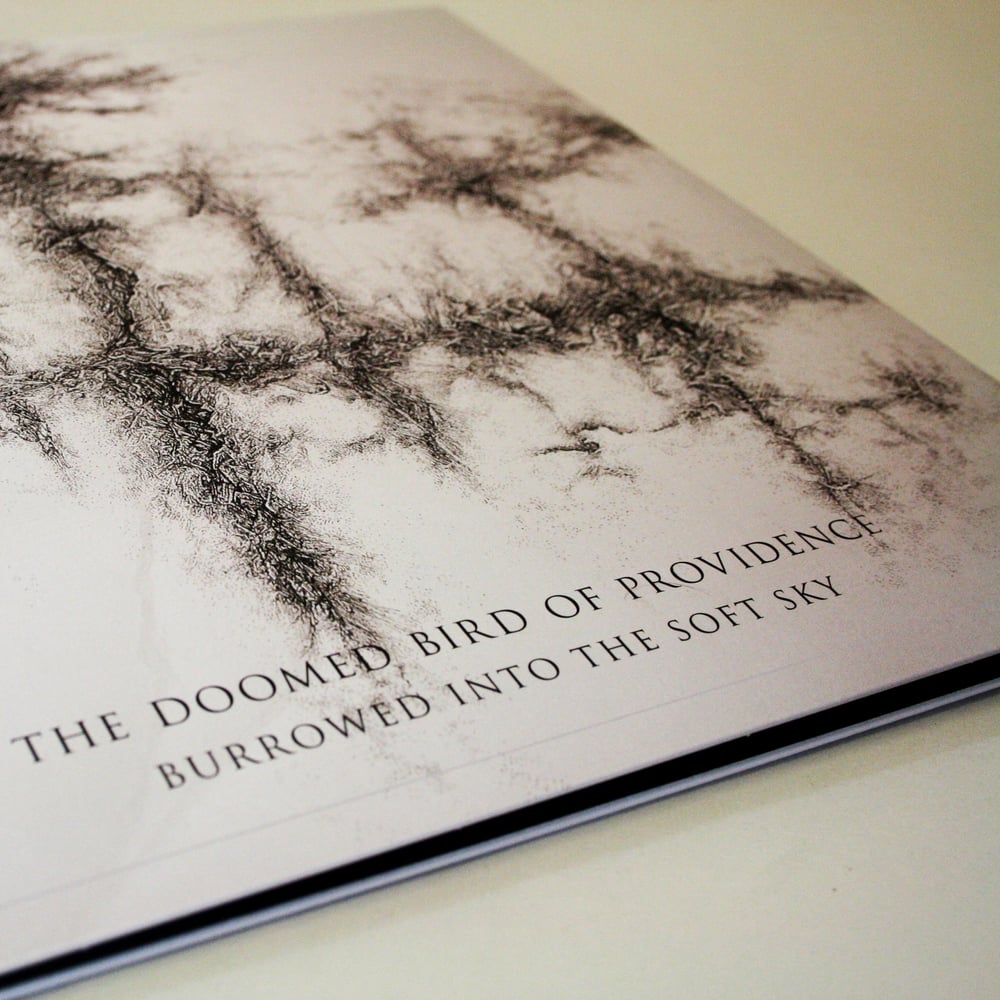 The Doomed Bird of Providence - Burrowed Into The Soft Sky

by The Doomed Bird of Providence

Burrowed into the Soft Sky is the 3rd album by The Doomed Bird of Providence following the acclaimed Will Ever Pray (2011) and Blind Mouths Eat (2013). They have continued to mine the deep dark vein of Australian colonial history but have on this occasion discarded Mark Kluzek's vocals (narrating stories over a sequence of songs) in favour of two twenty minute instrumentals that continue Kluzek's obsessive and singular foray into early colonial history while being a significant departure in terms of genre and approach.

The underlying themes for each track are contrasting yet tie together via their historical context; a period where indigenous Australian belief systems and day-to-day lives were irrevocably assaulted. The song Burrowed into the Soft Sky is based on a passage from Patrick White's novel Voss. The book is very loosely based on the final (and fatal) journey through the northern regions of Australia by German explorer Ludwig Leichardt. Kluzek took a passage from the book where a comet passes over and Voss, his team and a tribe of Australian Aboriginals engage with and interpret the experience until it is 'burrowed into the soft sky'.

All their lives haunted by spirits, these had been of a colourless, invisible, and comparatively amiable variety. Even the freakish spirits of darkness behaved within the bounds of a certain convention. Now this great fiery one came, and threatened the small souls of men, or coiled achingly in the bellies of the more responsible.

The Blood Dimmed Tide is Loosed takes a significantly darker turn shining a light on a pattern of atrocity that took place in the north east of Australia at a time where a dynamic of back and forth, invariably initiated by colonists, took place and culminating in a “dispersal” of a tribe, “by shooting them down – men, women and children, the object being to destroy as many as possible.” This is based on accounts of such events in the book Exclusion, exploitation and extermination : race relations in colonial Queensland (Raymond Evans, Kay Saunders, Kathryn Cronin). Attacks of this nature on tribes were commonplace.

At once fluid and shifting incongruously from one genre to the next, Kluzek graphically mapped out the sounds to correspond to a linear narrative. These were in essence the written compositions for each track, with some sections scored conventionally (for example some violin) and others created with layered diagrams created to guide the performers through the pieces, with references also provided to other pieces of music that conveyed some idea of the sound. It was an attempt to embrace this sort of music whilst keeping it completely unacademic and as visceral as possible.

The band took these maps and interpreted the symbols and written annotations as they saw fit for the most part.
Most of the album was recorded in London with time spent in Halifax and Colchester. Joolie Wood and Angela Chan provided very varied styles of violin playing. Rachel Laurence played viola. Katie English played flute, cello and glockenspiel. Stafford Glover played bass, Richard Acton played guitar (which involved producing layers of feedback in the main). Mark Kluzek played accordion and offered some ragged single line violin playing at the start of the title track. The percussion and bass were recorded in one all day session at St Martins Church in Colchester. Ian Hothersall (all percussion) fully utilised the church space to experiment with whatever objects were to hand, whether it was chairs, metal bowls or the floor brickwork.

The end results are the sum of a large scale collaborative venture, lead by Kluzek’s ideas but fleshed out by the varied creative approaches of each individual involved.

Side A – Burrowed into the Soft Sky

Side B – The Blood Dimmed Tide is Loosed